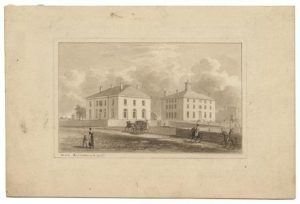 The Orphan Society of Philadelphia, at Eighteenth and Cherry Streets in Philadelphia, constructed its first home by 1815. By 1818, thirty-six orphans were living in the home. (Historical Society of Pennsylvania)

The Orphan Society of Philadelphia received a donation of land from Samuel Wetherill, Samuel Richards, Samuel Archer, and Robert Ralston, and by 1818 the new home at Eighteenth and Cherry Streets in Philadelphia housed thirty-six orphans. By 1822 the total had risen to ninety, but a fire that January destroyed one of the buildings and killed twenty-three children. Funds were raised for the construction of a second orphanage on the site by the middle of the nineteenth century.