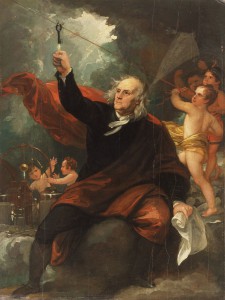 Benjamin West painted many portraits of influential figures from Philadelphia, including his close friend Benjamin Franklin, whom he commemorated in traditional portraits as well as this image recalling Franklin’s interest in science. In this memorial he included biblical and mythological figures expressed in the angelic children assisting Franklin in harnessing the power of lightning.