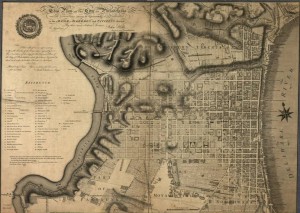 Map of Philadelphia, 1796. Although the original city plan envisioned a grid pattern stretching between two major rivers, residents clustered within eight or nine blocks of the Delaware. Click the map for a closer view. (Library of Congress)

Philadelphia was among the first “planned cities” in British North America. In 1683, William Penn (1644-1718) ordered his surveyor, Thomas Holme (1624-1695), to design the “City of Brotherly Love” on a grid pattern stretching between the two major rivers, with very large blocks and five squares to serve as parks. In opposition to the small, windy streets typical of England or Boston, Philadelphia’s streets intersected at right angles. Such an arrangement supposedly would make the urban area more airy and healthy. However, the city took on a life of its own. As evident from this map, residents established most of their houses and businesses within eight or nine blocks of the Delaware River.

John Hills used the most precise surveying and engraving instruments of the time to create this incredibly detailed map of Philadelphia in 1796. Even today, this map accurately depicts most of the city’s large streets, and people could use it to navigate the area of historic Philadelphia.