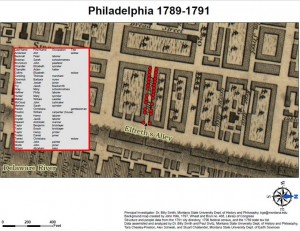 Elfreth’s Alley, which dates to the early eighteenth century, is perhaps the oldest continually inhabited alley in the nation. In 1790, thirty households with 123 people crowded into the alley. Most of them belonged to the lower classes: laborers, mariners, schoolmistresses, joiners, tailors, and bricklayers. In 1960, Elfreth’s Alley was designated a National Historic Landmark.