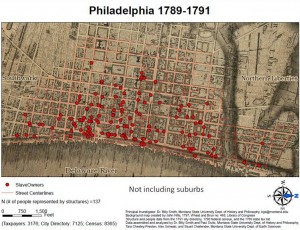 In 1780, Pennsylvania became one of the first states to pass a gradual emancipation law. A decade later, federal census takers recorded 301 slaves in urban Philadelphia, and that number continued to decline rapidly throughout the 1790s. As this map shows, slavery helped create a racially integrated city, at least as measured by residential patterns. Slave owners spread widely, with a slightly heavier concentration of them south of Market Street. Most black bound people lived in stables, attics, or basements, or occupied small out-of-the-way rooms in their owner’s home.