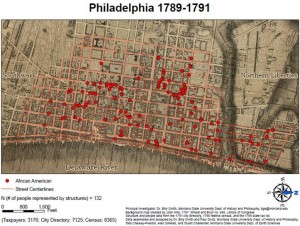 Most free black people lived in households containing between seven and fifteen people, as compared to the 6.2 average size of all households in Philadelphia. When given a choice, African Americans seemingly decided to live with others of their own race rather than in households headed by white men, who might expect to exercise control over their lives. During the 1790s, the expanding, vibrant community of black residents established the African Methodist Episcopal Church, the first free black Christian church in the Western World. The original church was an old blacksmith’s shop, which they moved to Sixth Street, in the midst of where many black free householders resided. Their neighborhood concentration surely facilitated the establishment of the church.