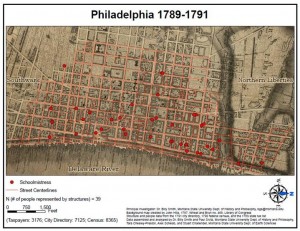 About 10 percent of female household heads taught schools, either running their own establishments or tutoring in one of the Young Ladies’ Academies that mushroomed in urban centers after the American Revolution. The new ideal of womanhood held that women should be at least minimally educated so that they could teach their sons to be responsible citizens in the new republic. As a result, a higher proportion of women, especially those from affluent families, became literate.

One of every five female household heads produced cloth items, toiling as spinners of thread, tailors, stocking weavers, or mantuamakers. A few operated brothels, popular in a seaport city filled with numerous peripatetic males like sailors. Some household heads identified as “gentlewoman” may have been sufficiently wealthy, perhaps having inherited money from their husband or father, to not have to labor for wages. Many widows and other women who lived in families earned wages essential to keeping the household afloat as housekeepers, clothes washers, cooks, seamstresses, and hired servants.