Capital of the United States 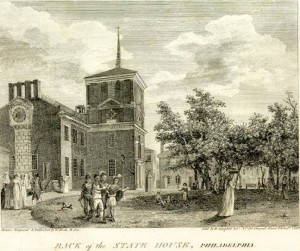 The Pennsylvania State House in 1799, depicted in an engraving by William Birch.(Library of Congress)

William Birch created this engraving of the Pennsylvania State House in 1799, when the building was still serving as the capitol of the United States. The House of Representatives, United States Senate, and Supreme Court all met in this edifice that would subsequently become known as “Independence Hall.” A group of Native Americans who have come to negotiate a treaty is depicted in the foreground.