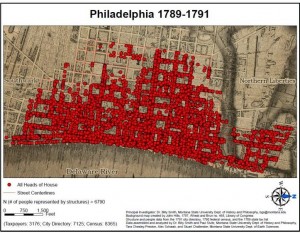 For a small city (by modern standards), Philadelphia was surprisingly densely settled during the 1790s. Rather than spread westward from the Delaware River to the Schuylkill River, as William Penn had hoped, Philadelphians subdivided the large blocks with numerous alleys, lanes, and courts and crowded up and down the Delaware River. Since most residents travelled on foot (only wealthy ones rode horses or carriages), they could not move very far away from their workplace or from the markets and stores where they purchased food.