Densities of Structures and People 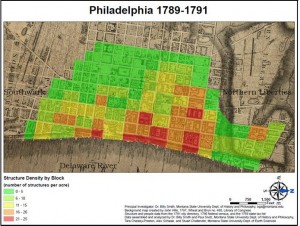 By 1800, the population density measured well over 50,000 residents per square mile, reaching levels of nearly 93,000 near the wharves and just south of the center city. Those figures far exceed density in American cities today; they even approximate some of the worst crowding in immigrant areas of New York later in the nineteenth century. In this map, the blocks in darker red contained the greatest concentration of people and houses while yellow indicates the least crowded areas.