The Elite Corridor of Market Street 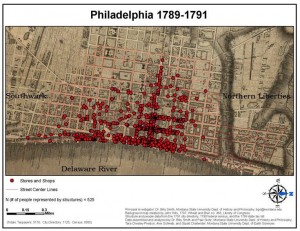 Merchants congregated near the sites where they engaged in business, especially along the wharves of the Delaware River. Hundreds of ships docked at the piers each year, unloading imported goods from Europe and sugar from the West Indies and loading wheat and flour on board. Merchants also gathered near the “elite corridor” (in the phrase of geographers) of Market Street. Shops selling luxury items predominated, including artisans like coachmakers, saddlemakers, goldsmiths, and clockmakers, as well as stores selling imported fashionable goods. Ironmongers—the equivalent of hardware stores—could afford the high real estate of center city, selling all kinds of metal supplies for artisans, housing constructors, and ship builders.