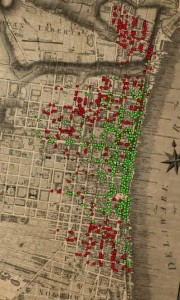 A person’s position in the socioeconomic structure often determined the parts of the city in which they could afford to live. Merchants, a wealthier group of citizens represented by the green dots, established their business along the wharves of the Delaware River as well as along Market Street. Laborers, the largest occupational group in the city, and comprised of men near the bottom of the class structure, are represented by red dots. Renting inexpensive quarters, married laborers often lived with their families (5 people on average) on only a single floor of a three-story structure. Unmarried workers shared rooms in boarding houses. Laborers congregated in the northern, southern, and western areas.