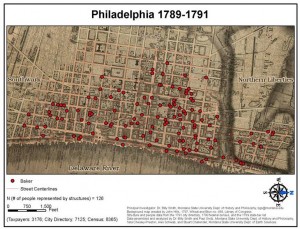 Bakers provided inhabitants most with the staff of life. Since most Philadelphians bought bread every day, bakers spread throughout the city for the convenience of consumers. Women in poorer households made the dough and then paid the baker a small fee to bake it. Philadelphians bought most of their fresh foods in the three open-air markets, the most prominent one being in the eastern blocks of Market Street. Serving the southern part of the city, the “New Market” (or Headhouse) stood in Second Street. It has been restored and is designated a National Historic Landmark.