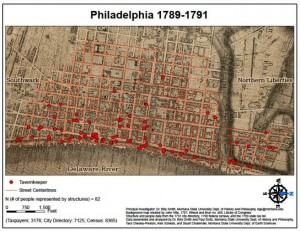 Like most Americans at the time, Philadelphians were a hard-drinking group of people during the 1790s. About 180 tavernkeepers, innkeepers, and beerhouses served the population. Rum produced locally from the molasses imported from the West Indies was a popular drink, as was beer. Many of those establishments settled along the waterfront, where mariners, stevedores, shoemakers, porters, and laborers joined merchants and attorneys in conversation and drinking.