The Rough Side of Town 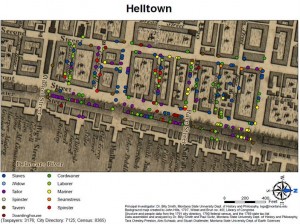 The three blocks along the waterfront north of Market Street was called “Hell Town” because it was such a rough neighborhood. It was home to many down-and-out Philadelphians: vagrants, criminals, prostitutes, itinerants, fugitive slaves and servants, the insane, incapacitated, and homeless. These men, women, and children accounted for one out of every ten people in the city, and they often appeared on the dockets of the almshouse, workhouse, prison, and hospital. Also located in this area was the Three Jolly Irishmen, one of the most notorious taverns in the city.