Walkout of the Dixiecrats 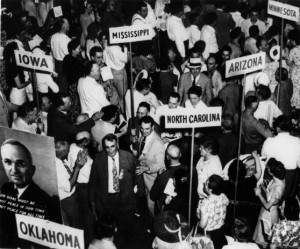 A major Southern revolt rocked the Democratic Party when 1,200 delegates gathered July 12-15, 1948, to nominate Harry S. Truman at the Municipal Auditorium and Convention Hall in Philadelphia. Southerners initially supported their own candidate, Senator Richard Russell of Georgia, until Truman soundly defeated all challengers on the first ballot. When Minneapolis Mayor Hubert Humphrey made a floor speech endorsing the first-ever civil rights plank in the party’s platform, Southern delegates walked out of the convention and later formed the “States Rights Democratic Party,” more popularly known as Dixiecrats.