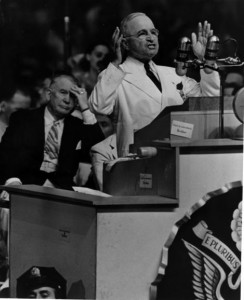 During the summer of 1948, Philadelphia hosted three national party conventions: the Republicans, the Democrats, and the Progressives. The Democrats nominated President Harry S. Truman, shown here speaking to the convention on July 15, 1948.