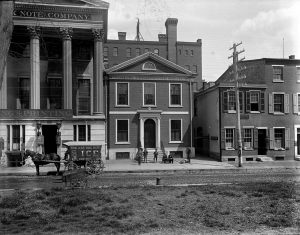 Benjamin Rush established the Philadelphia Dispensary in 1786. It was the nation’s first walk-in charity health clinic. (Library Company of Philadelphia)

Philadelphia’s destitute could seek medical care at the Philadelphia Dispensary. Established by Benjamin Rush in 1786, the Dispensary was the nation’s first walk-in charity health clinic. It was located on Fifth Street near Sansom Street. This photograph is of its second building, completed in 1801. The Philadelphia Dispensary provided both inpatient and outpatient services, but refused to treat patients with venereal disease or delirium tremens, a side effect of alcohol withdrawal. The building was demolished in 1922 and the site is now part of Independence National Historical Park.