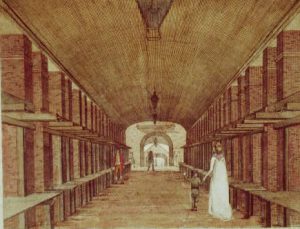 A print by William Birch depicts one of the High Street Market sheds in 1800, on a day when vendors were not present.(Library of Congress)

The High Street Market, depicted in 1800 in this print by William Birch, was included in William Penn’s original plans for Philadelphia, with the market to be open two days a week —Wednesday and Saturday.

To regulate the High Street Market, a clerk appointed by the local government was given the task of managing the marketplace. Along with collecting rent from the market’s vendors, the clerk was given the duty of confiscating any food items that did not meet certain weight regulations. The market became the model of an efficient marketplace in the United States, impressing visitors with its organization and with the variety of produce and other foods.