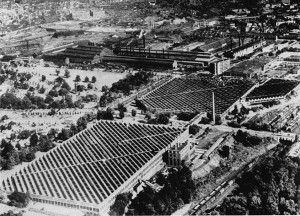 In 1924, Atwater Kent Manufacturing moved to a new plant at 4745 Wissahickon Avenue in Northwest Philadelphia and eventually expanded to thirty-two acres there. (Library of Congress)

The Atwater Kent Manufacturing Works, founded by inventor and engineer Arthur Atwater Kent, was based from 1902 at 48 N. Sixth Street in Philadelphia. In 1924, the company moved to a new plant at 4745 Wissahickon Avenue in Northwest Philadelphia. By 1928, Atwater Kent was the largest radio manufacturer in the world, prompting the construction of a second plant on the other side of Abbotsford Road. Both buildings, which were designed by Ballinger Architects and Engineers of Philadelphia, were flooded with natural light thanks to Ballinger’s patented truss system. As shown in this photograph, the two plants were connected by an enclosed bridge. Although the second building was demolished in the 1990s, the original plant in 2016 housed several operations, including the Wissahickon Charter School and Material Culture, a retail outlet featuring antiques, furniture, tapestries, and decorative art from Africa and Asia.