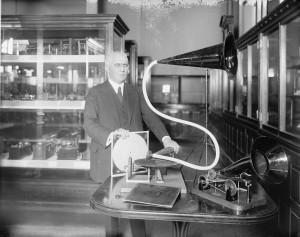 Emile Berliner, inventor of the gramophone, pictured in 1921 with early gramophone prototypes. (Library of Congress)

Emile Berliner, pictured here in 1921 demonstrating the gramophones that he helped invent decades earlier, was involved in creating the first gramophone that utilized a horizontal disk to play back recordings. After a public unveiling of the gramophone at the Franklin Institute in Philadelphia in 1886, Berliner went on to form the United States Gramophone Company, later named the Berliner Gramophone Company, to sell his hand-operated musical players. The main offices of the Berliner Gramophone Company were located on South Tenth Street in Philadelphia until 1900, when sold his patents to Eldridge Johnson of Camden. After selling his patents, Berliner began to work on designing and improving motorized devises for the automobile and aeronautic industries.