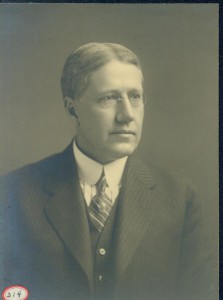 Eldridge Johnson, founder of the Victor Talking Machine Company, popularized the horizontal disk format through devices such as the Victrola and improved recording techniques. After graduating high school in 1882, Johnson worked as an apprentice in a machine shop in Philadelphia for five years and was hired as a machinist by the Scull Machine Shop in Camden, New Jersey, in 1888. Johnson purchased the Scull Machine Shop in 1894 and renamed it the Eldridge R. Johnson Manufacturing Company. He continued to produce a variety of machines, including small steam motors and book binding machines, in addition to altering machines produced by other companies. The recording industry became the focus of the Johnson Manufacturing Company after 1895, when Emile Berliner ordered hand-wound spring motors from Johnson for a new gramophone design. By the time Johnson purchased Berliner’s gramophone patents in 1900, Johnson had already worked with other machine specialists to improve both the gramophone and the process of recording sound onto a horizontal disk. The techniques Johnson assisted in developing produced better sound quality while lowering the cost of disc replication. Johnson’s development of machines like the Victrola and recording processes made the Victor Talking Machine Company (incorporated in 1901) into one of the largest manufacturers of musical recordings in the early twentieth century.