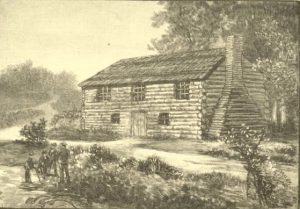 Inspired by the transatlantic religious revival known as the First Great Awakening, “New Side” Presbyterian minister William Tennent founded a school to train evangelically minded, converted clergy. “Old Side” critics bemoaned the unconventional preaching style Tennent encouraged among his pupils. They also mocked Tennent for attempting to educate poor country boys, derisively referring to his academy as the “Log College.”

Although the backcountry academy was short-lived, its alumni would have a profound impact on both American Presbyterianism and education. Notable graduates included Samuel Blair, Samuel Finley, and William Tennent Jr., three of the original trustees of the College of New Jersey. Finley later served as president of this prestigious institution, which by that time had been renamed Princeton University.

Charles Beatty, another distinguished alumnus, was making his living as an itinerate peddler when he stumbled upon Tennent and his so-called “Log College.” Tennent convinced Beatty to give up peddling and train for the ministry. Following Tennent’s death in 1743, Beatty assumed his former mentor’s role as pastor of the local Presbyterian church. However, he is better known for his missionary work among Native Americans and families living in the scattered settlements along the western frontier.