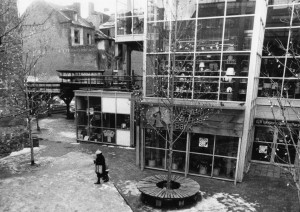 As part of the redevelopment of Society Hill in the 1970s, the NewMarket was an attempt by real estate developers to create a modern shopping center within walking distance of local residents. Opened in 1973, NewMarket was constructed in the middle of the block bounded by Front, Lombard, Pine, and Second Streets, which left some row houses around the block standing, like the one in the background of this 1978 image of the shopping center. NewMarket had entrances on Front and Second Streets, leading to a large courtyard, a central fountain, and the entrances to many of the shops. Neighborhood shoppers were not drawn to the modern building design and its variety of restaurants and specialty shops. Low sales forced dozens of businesses to leave the building over the years and the NewMarket formally closed in 1987. The building was used sparingly in the 1990s as new owners attempted to find a market, but the building remained largely unoccupied and the whole complex was demolished in 2002. The land finally came under redevelopment after the Toll Brothers purchased the land in 2013 to construct condominiums.