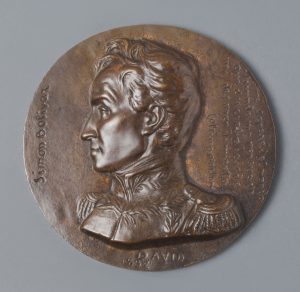 General Simón Bolívar of Venezuela, depicted in this bronze bust portrait set in relief on an 1832 medallion by Pierre Jean David d’Angers, visited Philadelphia on his way home from Europe in 1806. (Philadelphia Museum of Art)

Prior to the creation of this bust portrait of Simón Bolívar of Venezuela (1783-1830), set in relief on an 1832 medallion by David d’Angers, Bolívar visited Philadelphia on his way home from Europe in 1806. As he sailed from Philadelphia to La Guaira, near Caracas, Bolívar was convinced that in the United States he had seen “rational liberty for the first time.” Subsequently, in the late 1810s and 1820s, Bolívar’s army freed northern South America from Spain. Bolívar’s legacy continued to be recalled in later Philadelphia culture. In 1988 the “Simon Bolivar,” a brigantine tall ship under the Venezuelan flag, visited Philadelphia as part of an 85-day voyage along the East Coast.