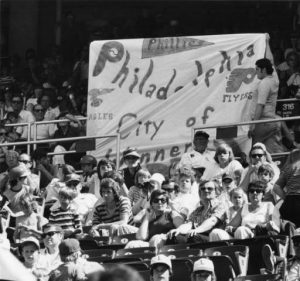 The Philadelphia Eagles football team had yet to capture a Super Bowl, the most coveted prize in the National Football League, although the Eagles did win the 1960 NFL title before the Super Bowl existed. In any case, the passionate Eagles fan base remained loyal and hopeful that the elusive Super Bowl trophy would someday be claimed.

The standard celebration for championship victories in Philadelphia is a parade through Center City to the Sports Complex in South Philly, where Philadelphia’s major league stadiums are located. Crowds of fans greet the winning athletes, who show off the championship trophy to their supporters. Philadelphia-based colleges have also participated in championship parades, as when Villanova University’s men’s basketball team won the NCAA champion in 2016.