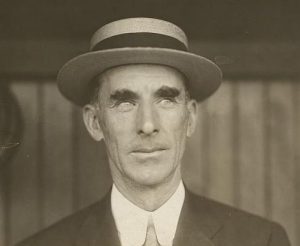 Philadelphia Athletics manager Connie Mack was not a fan of hecklers and those who disturbed the peace at the Shibe Park in Philadelphia. At a game in 1927, Mack had a fan arrested. (Library of Congress)

Connie Mack managed the Philadelphia Athletics baseball team for fifty years, during which the team won five World Series championships. Mack was inducted into the National Baseball Hall of Fame in 1937.

Mack and the teams he managed were largely successful during his tenure, but that did not stop the odd heckler at Shibe Park from lambasting Athletics players who made errors or had poor games. On September 15, 1927, at a game against the Chicago White Sox, a heckler named Harry Donnelly, twenty-six-years old, was arrested by police at Mack’s insistence for disturbing the peace of the ballpark and for damaging team morale. Although some fans did heckle the Athletics team, the A’s also brought joy to the city by winning two World Series championships, in 1929 and 1930, just as the Great Depression was beginning.