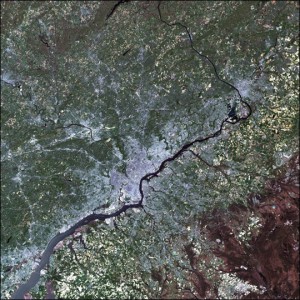 A satellite image of the Philadelphia metropolitan area illustrates the effects of urban sprawl on land use. (NASA)

This image of the Greater Philadelphia metropolitan area, captured by the LANDSAT 7 satellite on April 24, 2002, shows the realities of urban sprawl. In its Connections 2040 report, the Delaware Valley Regional Planning Commission (DVRPC) estimated that only 22.6 percent of the land in the Philadelphia metropolitan area remained undeveloped—a statistic borne out by the visible development along the Delaware River seen in this photograph.