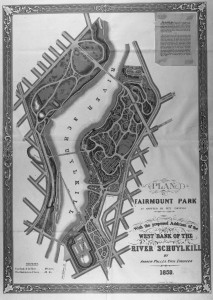 Quaker estates along the Schuylkill became the origins of Fairmount Park. (Historical Society of Pennsylvania)

Lumber had been a primary resource for construction and energy production in Philadelphia from the time the city was established, but the requirements for more lumber as the city grew had a devastating effect on the nearby hinterland. Thousands of acres of forest were razed to supply businesses and individuals with lumber and clear space for new buildings and factories. During the 1840s, the City of Philadelphia began to purchase land along the Schuylkill River to protect the city’s water supply, land that eventually became Fairmount Park. The first property the city purchased was a forty-three-acre parcel owned by Robert Morris, the property to the right of the Schuylkill on this map. Fairmount Park was officially established in 1855, but the Fairmount Park Commission continued to expand the park to eventually include more than 4,100 acres of land. This 1859 map shows the first proposed expansions of the park to the west of the river.