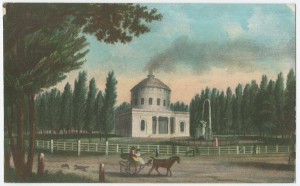 Before the construction of Philadelphia’s city hall, the square at the intersection of Broad and Market Streets was one of the five public squares that William Penn designated in his original layout of the city. This painted postcard from the late nineteenth century depicts the “Centre Square” when it still had an engine house that powered Philadelphia’s first waterworks in 1801 and featured a fountain with a wooden allegorical figure representing the Schuylkill River designed by city councilman William Rush in 1809. The tall Lombardy poplar trees that lined Centre Square were popular in early nineteenth-century America because they could be easily transplanted and grew quickly.