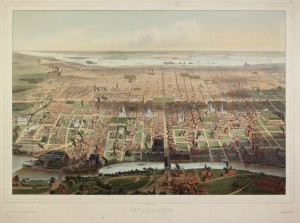 This 1857 bird’s-eye view (facing east, with the Delaware River in the distance and the Schuylkill in foreground) produced by John Bachmann shows an expanding Philadelphia that still had a variety of green space. (Library of Congress)

In this eastward-facing aerial view of Philadelphia produced by John Bachmann in 1857, all five public squares (Centre, Franklin, Logan, Rittenhouse, Washington) can be seen with their thick tree cover surrounded by the buildings of the growing city. In the 1850s, Philadelphia was expanding, but still had lush green fields to the north and numerous city blocks that were still undeveloped. In this view, the Schuylkill flows in the foreground and the Delaware River is in the distance.