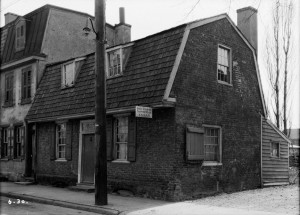 Quaker George Hutchinson, one of the initial founders and developers of the Burlington settlement, built this home for his family in 1685. (Library of Congress)

Built in 1685 by wealthy Quaker George Hutchinson, the Revell House, pictured here in the 1930s, is one of the oldest standing structures in the City of Burlington Historical District. Hutchinson was among the earliest Quakers to settle the Burlington colony, served briefly as colony treasurer, and by the early 1680s purchased hundreds of acres of land to start a plantation. Hutchinson lived in this one-and-a-half-story brick house with his family until 1696, when they moved to Philadelphia and the house was sold to Thomas Revell. Revell served as the clerk of the West Jersey Assembly and was appointed by a group of West Jersey proprietors in 1680 to survey and sell tracts of land to new immigrants settling near Burlington. Revell changed the interior of this house into an office and drafted deeds for new land sales there between 1696 and 1699.