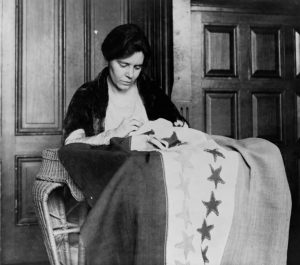 Alice Paul, in a photo taken between 1912 and 1920, sews stars on the suffrage flag to represent states that had ratified the nineteenth amendment.

Alice Stokes Paul (1885–1977) was founder and chair of the Congressional Union, later the National Woman’s Party. Born in New Jersey, she attended Swarthmore College before traveling to England to study social work. There she became involved with the Women’s Social and Political Union and brought their tactics back to the United States. Frustrated by the conservative approach of the National American Woman Suffrage Association, in 1913 Paul formed the Congressional Union for Woman Suffrage, which became the National Woman’s Party. The NWP demonstrated and agitated for woman suffrage. Paul began her agitation in Philadelphia. In 1917, Paul was arrested for picketing outside the White House and jailed at Occoquan Workhouse in Virginia, where she led a hunger strike and was force fed. In 1923, Paul authored the “Lucretia Mott Amendment,” which became known as the Equal Rights Amendment. She is pictured in a photo taken between 1912 and 1920 sewing stars on the suffrage flag to represent states that had voted for woman suffrage.