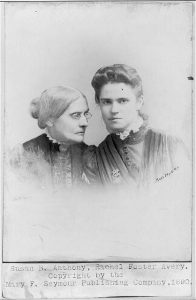 Rachel Foster Avery (1858–1919) was a member of the Citizens’ Suffrage Association of Philadelphia and joined the National Woman Suffrage Association by the early 1880s. She quickly became corresponding secretary and a close collaborator of Susan B. Anthony (1820–1906). In Philadelphia, she tried to bridge the competing factions of the woman suffrage movement. Her home, Mill-Rae, became a meeting place for suffragists. Anthony considered Avery to be like a niece to her, and she named Avery an executor of her will.