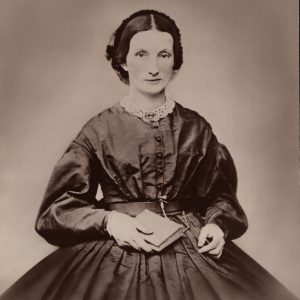 The Female Medical School of Pennsylvania, later renamed the Woman’s Medical College of Pennsylvania (WMCP), opened during an era of reform, just two years after the first woman’s rights convention at Seneca Falls, New York. The college’s founders, early supporters, faculty, and earliest students reflected this reform mindset. The inaugural class of 1852, for example, included Chester County-bred Quaker Ann Preston, who had been active in the abolition, temperance, and women’s rights movements.

Although her formal education was cut short when her mother fell ill, Preston attended lectures at the local lyceum and literary associations while caring for her family. In her twenties, Preston began teaching hygiene and physiology classes for women before beginning a two-year medical apprenticeship under Dr. Nathaniel Moseley. Preston’s sought to educate women about their bodies. Like so many other women of her time, she had been rejected from several medical schools in the Philadelphia region, so when the WMCP opened in 1850, she enrolled immediately. After completing an additional year of courses, Preston became professor of hygiene and physiology.

Preston understood the value of practical clinical experience. Minimal even at traditional male medical schools, clinical training was even harder for female students to access. For this reason, Preston led the effort to establish the Woman’s Hospital of Philadelphia on North College Avenue. The hospital, which opened in 1861, offered surgical and medical care for women and children. More importantly, it provided practical clinical experience for the WMCP students. In 1863, Preston helped establish a training program for nurses at the hospital. By the end of the decade, the Woman’s Hospital had become a flourishing independent institution known for its women surgeons, internships, and early nursing school. Preston went on to become the first woman dean of the WMCP—and of any medical school—in 1867, initiating a tradition of women deans at the college that continued unbroken for one hundred years.