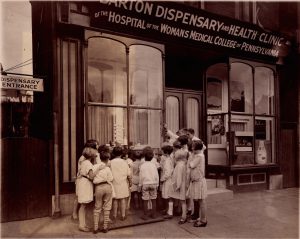 Children examine a window exhibit while waiting in line at the Barton Dispensary in 1927. (Drexel University College of Medicine Legacy Center Archives and Special Collections)

Woman’s Medical College of Pennsylvania (WMCP) faculty and alumnae expanded students’ opportunities for academic and real-world medical experience in the late nineteenth century. Dr. Amy S. Barton graduated from the WMCP in 1874. Following graduation, Barton became interested in ophthalmology and – after surmounting gender-based discrimination – gained acceptance to the Wills Eye Hospital, where she assisted the renowned ophthalmologist George Strawbridge for more than a decade before returning to the WMCP as professor of ophthalmology. Concerned that entirely too much emphasis was placed on teaching female medical students obstetrics and gynecology, Barton was determined to establish a clinic where all branches of medicine could be practiced. On October 31, 1895, Barton’s vision came to fruition with the opening of the Hospital and Dispensary of the Alumnae of the Woman’s Medical College of Pennsylvania in South Philadelphia. Not only did the dispensary hold tremendous educational value for the WMCP students, it also served a community whose poorest residents might otherwise have no access to quality health care. In this 1927 photograph, children examine a window exhibit while waiting in line at the dispensary, which by this time had moved to 333-335 Washington Avenue and had been renamed the Barton Dispensary and Health Clinic.