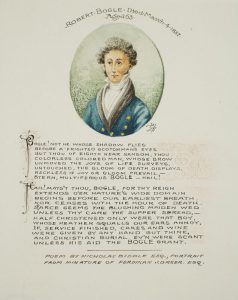 Robert Bogle, born a slave in 1774, became a successful cook after obtaining his freedom. Bogle provided food for various events such as weddings, meetings, and funerals, effectively inventing the modern concept of catering. Through his successful catering business, Bogle became a fixture in high society and grew close to prominent Philadelphians, such as Nicholas Biddle, financier and president of the Second Bank of the United States. Several free blacks found catering a prosperous career and organized a Guild of Caterers. After Bogle’s death in 1837, Biddle wrote this poem in remembrance of a man known for his taste, style, and culinary abilities.