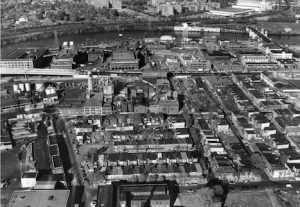 DuPont’s assets grew tremendously during World War I, when the company supplied the Allies and the United States with explosives. DuPont used its newfound wealth to diversify into chemical manufacture, principally by buying other firms, such as the venerable Harrison Brothers’ Company in 1917. The sales agreement included the massive Harrison Brothers complex on Gray’s Ferry Avenue. DuPont continued to manufacture paint at the facility for nearly four decades before converting it into a research and development center. This photograph shows the Gray’s Ferry plant in 1976. In 2009, DuPont closed the complex and sold the site to the University of Pennsylvania for $13 million. In 2013, Penn unveiled an ambitious plan for redeveloping the twenty-three-acre site, which was named Pennovation Works.