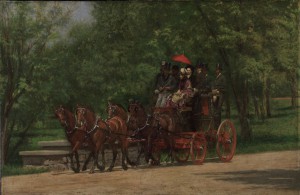 This work features Fairman Rogers (1833-1900), a civil engineer and one of the first Philadelphians to own a four-in-hand coach, driving through Fairmount Park with his family. To accurately depict the horses in motion, Eakins not only created wax sculptures of the animals, but he also relied upon Eadweard Muybridge’s groundbreaking equine photographs, which precisely captured the positions of horses’ limbs while trotting. Instead of painting the individual spokes of the moving wheels, however, Eakins represented them as blurred marks as the human eye would have seen them.

The Fairman Rogers Four-in-Hand (A May Morning in the Park), 1879-80. Oil on canvas. Philadelphia Museum of Art, Philadelphia.