The Free Military School for Applicants for Command of Colored Troops

The Free Military School for Applicants for Command of Colored Troops 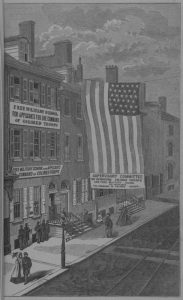 The Free Military School for the Command of Colored Regiments was founded in 1863 on Chestnut Street near Twelfth Street to train white men seeking to become officers in the USCT. White students at the Free Military School attended classes for three hours a day, six days a week. They studied army regulations, military tactics, geography, arithmetic, and history. The men were required to attend drill and dress parade and assisted in training troops at Camp William Penn. Students were only required to stay at the Free Military School for thirty days. After they received their training, the men reported—at a determined date—to a board of examiners, where they were tested on their academic and military knowledge and judged according to their moral, mental, and physical fitness to lead. Most graduates of Philadelphia’s Free Military School performed satisfactory before the examination boards, with 96 percent of men passing, many with honors. Despite its success, the school was forced to close in September 1864 due to a shortage of funds, after less than a year in existence.