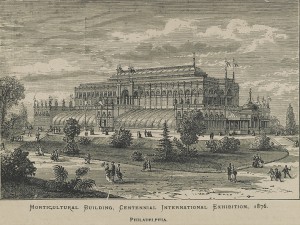 A botanical garden was one of the centerpieces of the 1876 Centennial Exposition. It was housed in Horticultural Hall, a massive glass and iron greenhouse in Fairmount Park. (Library of Congress)

Some of the buildings constructed for the 1876 Centennial celebration were designed to be permanent public attractions. Among these was Horticultural Hall, a Moorish glass greenhouse that housed a collection of exotic plants. The building was surrounded by elaborate formal gardens. After the Centennial ended, the grounds were maintained and the botanical gardens within Horticultural Hall continued to be open to the public. During the Great Depression and World War II, it gradually fell into disrepair and the gardens surrounding it were abandoned and removed. Hurricane Hazel did further structural damage to the building in 1954 and it was finally demolished in 1955. Horticultural Hall was replaced by the new Horticulture Center for the 1976 Bicentennial Celebration. The new pavilion includes a greenhouse, arboretum, and the Shofuso Japanese House and Garden.