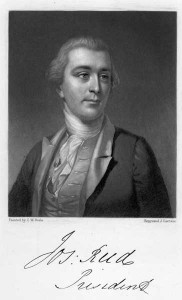 When Joseph Reed halted the militia attack on Fort Wilson in 1779, he had already gained years of experience assisting in the Revolutionary War and participating in newly established political positions. Born in Trenton, New Jersey, on August 27, 1741, Reed grew up in Philadelphia and attended classes at the Academy of Philadelphia (the modern University of Philadelphia). He obtained additional education from the College of New Jersey (Princeton University) and traveled to London, England, to study law. He opened a law practice in Philadelphia, but closed it to become President of Pennsylvania’s Second Provisional Congress, which debated how Pennsylvania should react to the developments of the First Continental Congress. Serving the Revolutionary cause led Reed to a position as secretary (and later adjutant general) to George Washington. Reed resigned from the Continental Army in 1777 and began working with the Pennsylvania Assembly to prosecute treason cases. Members of the Pennsylvania Supreme Executive Council elected Reed as their president in 1778. The Fort Wilson event occurred during the final month of Reed’s first annual term and with his support, the Council pardoned the militiamen. Reed remained president of the Pennsylvania Supreme Executive Council for an additional two terms, before losing his seat in 1781. Reed continued to practice law through his own firm and for the Continental Congress from 1781 until his death in 1785.