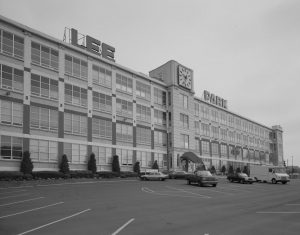 The main building of the Lee Tire and Rubber Company was built in 1909 in Conshohocken and was added to the National Register of Historic Places in 1984.(Library of Congress)

J. Ellwood Lee opened his first factory in Conshohocken, Pennsylvania, in 1887 selling medical supplies. In 1905 Lee believed automobiles would become popular and merged his medical supply company with Johnson & Johnson, leading to the creation of the Lee Tire and Rubber Company, which opened in 1914. The main building of the Lee Tire and Rubber Company, shown here, was built in 1909 and was added to the National Register of Historic Places in 1984.

The company began to decline in the 1960s and was taken over by a New York firm, which changed the name to Lee National Corporation. In 1965 the company was sold to Goodyear Tire and Rubber Company, which restored Lee’s original name. The changes delayed the company’s demise, but it went out of business in 1980.

Lee Tire’s position within sight of a bend in the Schuylkill Expressway gave it a noteworthy place in the history of Philadelphia-area traffic reporting. The stretch near Conshohocken was often the scene of back-ups and some radio traffic reporters referred to the section informally as the “Lee Tire curve” during the years before the property was sold and the name atop the building slipped into history. The section of expressway now is referred to as simply the Conshohocken curve.