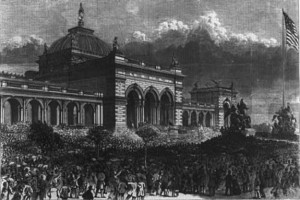 In this 1876 wood engraving, a large crowd watches as President Ulysses S. Grant (1822-85) cuts the ribbon for the opening of Philadelphia’s Memorial Hall to begin the Centennial Exhibition to celebrate the one hundredth anniversary of US independence. (Library of Congress)

In this 1876 wood engraving, a crowd watches as President Ulysses S. Grant cuts the ribbon for the opening of Philadelphia’s Memorial Hall to begin the Centennial Exhibition celebrating the one hundredth anniversary of U.S. independence.

The Beaux-Arts-style building housed an art gallery during the exhibition. In 1877 it was reopened as the Pennsylvania Museum of Industrial Art, Philadelphia’s first municipal art museum administered in partnership by the Fairmount Park Commission and a board of trustees. The collections quickly outgrew Memorial Hall and by 1928, a new museum had been built atop the former reservoir at Fairmount.

However, the museum collections were divided between the Fairmount building—later renamed the Philadelphia Museum of Art—and Memorial Hall until the mid-1950s. By 1958, the Fairmount Park Commission had moved its offices into the building, which now also housed a gymnasium and police station. By the early 2000s, the building was in disrepair and underwent an expensive renovation. It was reopened as the new home of the Please Touch Museum, a museum for children, in 2008.