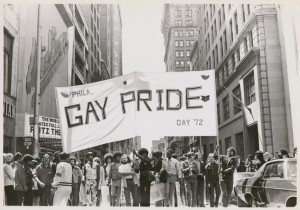 Participants in Philadelphia’s first Gay Pride Parade in June 1972 marched along Chestnut Street towards Independence Hall, extravagantly expressing themselves through signs, music, and chants as they marched.(Photo courtesy of the John J. Wilcox Jr. LGBT Archives)

Participants in Philadelphia’s first Gay Pride Parade in June 1972 met in Rittenhouse Square and marched to Independence National Historical Park, where they held a rally with music and speeches. Rittenhouse Square was seen as a focal point in Philadelphia’s LGBT geography and Independence National Historical Park was understood to be a proper venue for public discourse on constitutional rights. Gay pride parades in the 1970s descended directly from the Reminder Day demonstrations of the 1960s, which were smaller picketing events at Independence Hall. Participants in the Reminder Day demonstrations dressed in conservative clothing (suits for men, dresses for women), but the gay pride parades were much more extravagant events. Marchers were encouraged to express themselves freely though fashion, group chants, and songs. (Photo courtesy of the John J. Wilcox Jr. LGBT Archives)