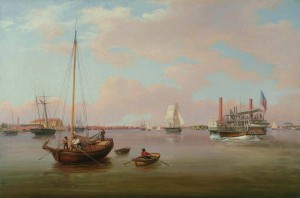 In this marine scene, the ship anchored in the background (next to the yellow building) is believed to be the U.S.S. Pennsylvania, thought to be the largest man-of-war built in the United States. The artist, Thomas Birch, was the son of William Russell Birch, with whom he helped to create The City of Philadelphia, in the State of Pennsylvania North America; as it appeared in the Year 1800 (also known as Birch’s Views), a masterpiece of copperplate engraving. For that volume, Thomas Birch painted scenes of buildings and landmarks in watercolor, which an engraver then transferred to copper plate.