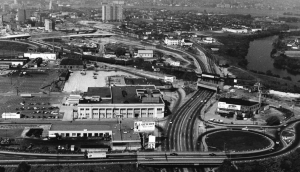 Landscape architect Charles Wellford Leavitt designed Admiral Wilson Boulevard based on the ideas of the City Beautiful Movement. It was designed to be visually pleasing as well as functional. Early buildings were designed according to these principles as well. The first Sears, Roebuck & Company building in Camden, the columned building shown here to the left of the six-lane Admiral Wilson Boulevard, opened in 1927. It was designed by the architecture firm Nimmons, Carr and Wright in the classical revival style.

After Sears left Camden for the suburbs in the early 1970s, a car dealership occupied its former store. In later years, various organizations used the space for offices, including the Camden Housing Authority. In 2000, the Sears building was added to the National Register of Historic Buildings, based on Charles Levitt’s influence on its design. However, the location clashed with the plans of another historic Camden business, the Campbell Soup Company. Campbell’s, which was founded in Camden in 1869, wanted to expand its corporate headquarters and its outreach to the Boulevard by developing the land on which the Sears building stood as a suburban-style office park. In 2009, Campbell’s asked the Camden Redevelopment Authority to condemn the Sears building and allow the company to acquire and demolish it by eminent domain. Preservation advocates, led by Camden community activist Frank Fulbrook (1949-2013), fought the demolition in court, but ultimately lost. In February 2011, a judge ruled in Campbell’s favor. An appeal filed by Fulbrook failed, and the Sears building was demolished in 2013 to make room for a new office park.