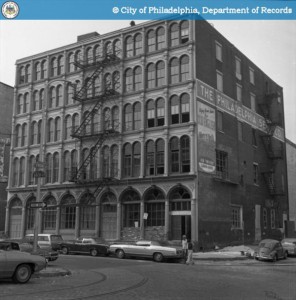 The first story façade of the Smythe Stores followed the popular use of iron on the exterior of a building. (PhillyHistory.org)

Philadelphia’s Cast Iron District runs from the Delaware River waterfront to Twelfth Street between Arch and Pine Streets, offering a worthy collection of commercial buildings with cast iron facades, storefronts, and decorative elements. One prominent edifice is the Smythe Stores building located at 101-111 Arch Street. Constructed in 1852, Smythe Stores was fashioned of cast iron manufactured by Tiffany & Bottom of Trenton, New Jersey. The original building was painted and sanded in imitation of stone. The design appeared in Samuel Sloan’s The Architectural Review and the American Builders’ Journal of March 1870, so he is assumed to be the building’s architect. Over the years some of the building’s elements were lost, and when it was rehabilitated into condominium apartments, fiberglass was used to replace missing material.