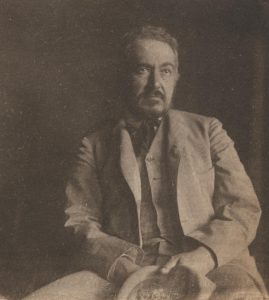 Thomas Eakins, photographed between 1894 and 1899, volunteered as an instructor at the Pennsylvania Academy of the Fine Arts in 1876 after his time as a student. The native Philadelphian began earning a salary in 1878 and became the director in 1882. His work capturing the movement of the human form and use of nudity gained Eakins a reputation for controversy, as an artist and a teacher. Students such as Beaux avoided Eakins classes, while others flourished under his tutelage. In 1886 Eakins was forced to resign from the Academy after removing the loincloth to expose a male model in a class that included female students. Finding teaching opportunities at other institutions but met similar ends because of his risqué methods, Eakins left teaching in 1898.