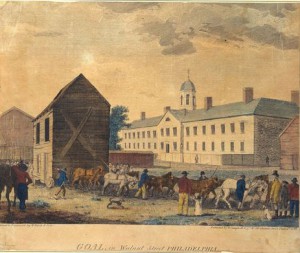 Opened in 1775, the Walnut Street Jail functioned as a holding facility housing the accused until they went to trial. (Library Company of Philadelphia)

Experiments with prisoner isolation began in the 1790s at the Walnut Street Jail located between Fifth and Sixth Streets behind the Pennsylvania State House (Independence Hall). Opened in 1775, the Walnut Street Jail functioned as a holding facility housing the accused until they went to trial. Large common rooms housed men, women, and children together. Critics labeled the Walnut Street Prison a “den of debauchery” and “school of crime.” Upon conviction, criminals faced harsh public punishments including the stocks, whippings, brandings, and beatings. In the aftermath of the Revolution, critics of this system including prominent physician Dr. Benjamin Rush (1745-1813) and the Philadelphia Society for Alleviating the Miseries of Public Prisons successfully petitioned the state to eliminate harsh public punishments in favor of a new experiment in isolation and labor. All prisoners were sentenced to labor within the walls of the prison, thereby moving punishment from the public to the private—an important shift in penological theory. Prisoners worked every day except Sunday. Tasks included weaving, nail making, shoemaking, and carding wool.

In 1789 and 1790 Pennsylvania passed legislation to convert a portion of the Walnut Street Jail into a penitentiary house for more serious offenders. Under that arrangement, prisoners served their sentence in complete isolation. Advocates of isolation argued for the humanity of silent reflection over the barbaric punishments of the past. Prison reformers viewed the initial experiment positively, but by the late 1790s the system began to break down due to severe overcrowding and mismanagement. Beginning in the early 1800s prison society reformers began agitating for a new penitentiary to fully implement their vision of total prisoner isolation.